Saturday, February 21, 2015 will be a big day for Lincoln Christian University LCU) basketball.

LCU will have a host of activities throughout the day including alumni games, a Hall of Fame induction for former NCCAA All-American Katie Geisler, a pair of varsity match ups against Maranatha Baptist University, and last but not least, a fundraiser for cancer research.

For years LCU has combined inductions into the Athletic Hall of Fame with alumni games and this year is no exception. In the morning, former players will come back to campus to participate in men’s and women’s alumni games that in the past have been entertaining to the point of comical. Alumni return to catch up with former teammates and coaches and invariably have a great deal of fun in the process. The ladies will tip-off at 9:30 a.m. followed by the guys at 10:30 a.m.

In the afternoon, the current Red Lions will face off against the Maranatha Baptist Sabercats.  The women’s game starts at 1 p.m. with a tentative start time for the men at 3 p.m. LCU and Maranatha have been NCCAA rivals for a long time and both teams feel the pressure to win and dominate the perennial series of home-and-home games.

Between the two feature games, LCU will induct Katie into the Athletic Hall of Fame. Among many other honors and notable accomplishments, Geisler was named to the NCCAA All-American 1st team as a senior in 2006 and was named to the 1st team at the national tournament the same year. With over 1,500 career points, she is in the upper echelons of basketball at LCU. 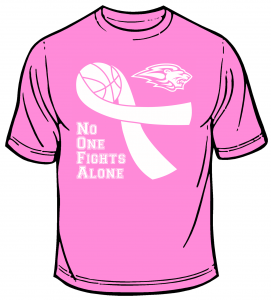 Throughout these activities, LCU and Maranatha will be joining forces in an effort to support cancer research. Participants and spectators are encouraged to make a $10 donation in exchange for a one-of-a-kind “No one fights alone” t-shirt to show their support for all those who are fighting cancer.