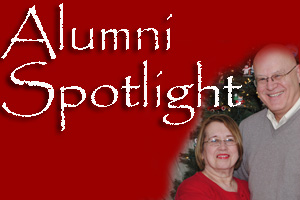 Jack (LCC ’72) and Penny (LCC) Tanner, moved to Newtown, CT in 1980, following a two year ministry with the cafeteria at Lincoln Christian University.

They answered God’s call to minister with the church following a summer internship in 1979.  They had been working with the college (Jack serving as the cafeteria manager) and both were active as sponsors with one of the Evangels outreach groups.  The summer internship led to the full-time ministry after an invitation by the elders of the church to consider coming to work full-time.  The church had been without a minister for about 18 months at the time.

Jack says, “When we decided to come to Newtown, we had agreed (with God) that we would give it 5 years.   I had not lived close to one of my grandparents, so I did not want to do that to my children.  I did not want them to miss their grandparents growing up.  But, God took care of that detail and our children knew their real grandparents as well as having others who served as their ‘adopted grandparents’”.

Ministry in Newtown, has been both challenging, exciting, discouraging, but through it all it has been a rewarding ministry for Jack and Penny.  The church is small, 105 at its high point and around 30 people at present, but Jack and Penny continue to minister to the needs of its people and most recently to the town of Newtown.

The events of December 14, 2012, forever changed the town of Newtown and the opportunities for ministry.   Jack had wondered if it was time for them to ‘move on’ to another ministry, really wondering why God had them still in Newtown.  And then, because of the tragedy that struck at Sandy Hook Elementary School, it began to become very clear that perhaps, this was the moment for which God had brought them there.

Jack and Penny have been able to minister to the town in ways never possible prior to the events of December 14.  There have been the usual things that follow a tragedy like this:  helping people deal with the event; counseling hearts that are pounding with hurt; and just sitting down and talking. Still, there are other unique opportunities of ministry.

God is indeed an awesome God.  The Newtown area ministers were able to do something on December 16 that would have been next to impossible just a few days before. They held a prayer service in the public high school.  And, not only did they have prayer, but a prayer service with the President of the United States and with ministers boldly proclaiming their faith and trust in God in an hour of great need.  God is awesome.

The week following the tragedy, the Town Hall workers asked Jack to come and read some scripture and have prayer with them.  There were a number of counselors and psychiatrists serving throughout the community; but none were visiting the Town Hall, so the workers felt like they were being overlooked.  The workers were trying hard to get lost in their work and maybe not have to deal with the tragedy for at least the hours they were working.   The people coming in to do their town business still wanted to talk about it.  So the town workers could not get away from it. Jack jumped at the opportunity to meet with them.  Since then, he has had weekly visits with each department, asking people if there was anything they wanted him and the church to take to God in prayer.  Jack and Penny have been blessed to pray with, and for, these town workers.  The church has been able to provide lunch for them during the month of April.  It was well received, and the church continues to enjoy a unique relationship with the Town Hall and its workers.

The church was also able to hold a 26-hour prayer vigil for the town during the month of March.  It was a wonderful, moving experience as the church spent 26 hours praying for the families who lost loved ones on December 14, and for the whole community as it continues to heal.

The church is planning to serve each of the Fire Departments, as well as the Ambulance Corp sometime during the month of June.  Other events to fill the needs of the community are also being planned.

Jack says, “The doors that have been opened up are unbelievable; if it were not for the fact that we serve an unbelievable God, it would not be unbelievable!  The church has come together as it has never come together before, looking for all the opportunities to serve a hurting community and to share the Good News of Jesus.  What will happen with all of this still remains to be seen, but with God in it, WOW!”