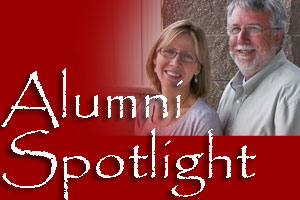 My father, Allen Payne, has been a faithful attendee of the Logan County Men’s Meetings for over five decades.

Back in the ‘60’s, he was a part of this group of men who dedicated many hours to build what is now known as The Warehouse, situated in the center of Lincoln Christian University’s campus. I was just a young five-year old boy at the time, helping out by carrying bricks and fetching tools for the masons during the construction. This had a lasting impact on my young life, and helped to solidify an early love for what was then called Lincoln Bible Institute.

Later, in 1977, when I drove away from my home in San Jose, Illinois, for the 23-mile trip to the campus of Lincoln Christian College [same institution, new name], I had no idea how that short drive would transform my life forever.  I was familiar with the campus, the layout, the process, and the purpose of the college, but I had no idea how it would affect my spirit and my soul. I was challenged to think beyond the religious clichés that were a part of my early Christian life, and encouraged to move toward deeper understandings.

I was one of those students who “crammed” a four-year degree into five years, and have to admit those five years were not the easiest of my life. For that, I am eternally grateful. Growth often hurts. Yet when our Heavenly Father matures us into the persons He wants us to be and moves us in the directions He wants us to go, it’s worth the hardship.

It seems like only yesterday that I walked into my first class at Lincoln Christian and began a journey that has taken my wife and me beyond our furthest dreams. And for that, I am honored to be an alumnus of Lincoln Christian University. The foundations of my Biblical world view, and solid Christian principles, were laid during my time at this godly institution, and my wife and I have had the privilege to take what we’ve learned to some of the most destitute people in central Illinois.

Our hope and prayer as we work with the homeless is that the Kingdom of God will continually advance as souls are being added. But praise God, we’ve been given the necessary tools to follow God’s will in ministry! I’ll always be grateful for that short 23-mile trip from my hometown of San Jose to Lincoln, a trip that would change my life forever.