In the midst of a university town in eastern central Mexico, the design of a new congregation came together quickly—the assembling of broken, imperfect people being formed and transformed by God into a beautiful work of art.

Cholula and Puebla are cities located side-by-side southeast of Mexico City. Cholula/Puebla has a  population of close to 4 million. Besides sharing its name with a great-tasting hot sauce, Cholula/Puebla is also the site of one of the most important universities in Mexico, the University of the Americas and the home of CMF’s successful Globalscope-Puebla campus ministry. CMF’s Globalscope campus ministry, called El Pozo, has been transforming the lives of hundreds of students during the last 9 years, with 80-100 attending their weekly Bible study. But students had not found a church family with the same or similar atmosphere, doctrine or beliefs, or style of worship. The campus ministers and students had prayed for nearly 7 years for this type of church in their area. Many of the university students and graduates still living in the area expressed a hunger to take the next step in their spiritual lives. They shared that El Pozo is fun and they grow a lot in faith and community. Yet they want to be a part of a healthy, growing, loving community of believers in Christ made up of people of various ages.

In 2011, Todd (LCC ’92) and Tonja (LCC ’93) Hancock, CMF International (CMF) missionaries on the Mexico church-planting team, were invited to join hands with the campus ministry in planting a church that would meet the needs of college students and their families. Todd and Tonja had already worked with church plants in Mexico City, and were energized by this partnership with CMF’s campus ministry and its possibilities.

God began publicly unveiling this new body of believers in January, 2012 with a Sunday morning fiesta to cast the vision for what Mosaico is and what God is leading it to become.

Mission Mosaico. We want to reach and transform lives through the love of Jesus Christ, biblical teaching, and growth in community.

Mosaico’s Vision. We want to be a constantly growing community of disciples of Jesus Christ that reaches all generations in Puebla, Mexico, and to the ends of the earth. 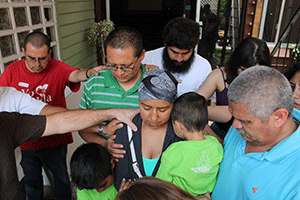 God is doing great things among this diverse group. The Mosaico has been, and is being made up of people from several different states in Mexico, as well as Germany, Australia, Spain, Chile, Columbia, Singapore, Venezuela, Canada, the U.S.A., and other nations. Many of these folks are in their 20s and 30s.

During the first two years of Mosaico’s existence they’ve baptized more than 20 people into Christ. And some families haved become part of the Mosaico making it even more diverse age-wise. The congregation is averaging around 70 when the university is in session. Todd and Tonja are focusing their efforts in developing the leadership of the church, mentoring/discipling, and equipping those in the church and standing together as they reach out into the community and around the world.

Another encouraging aspect of Mosaico is the potential global impact Mosaico can have. With so many international students who come through the campus ministry and the church, the Hancocks can literally touch the world with the message. They challenge the students to share the love of Christ and start a new church plant like Mosaico where they will live.

The picture is not yet complete, but God is certainly placing the pieces of this beautiful composition together for His glory and the salvation of the communities in the area. Todd and Tonja are Missionaries-in-Residence at Lincoln Christian University for the fall 2014 and spring 2015 semesters and are planning to return to Cholula, Puebla, sometime during the summer of 2015.

Todd, Tonja, Mitchell, Mallory, and Lizzet. Mitchell is a freshman at Milligan College, Mallory is a sophomore at Lincoln Community High School, and Lizzet is in first grade at Zion Lutheran School.