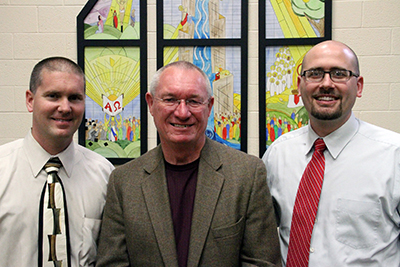 Dr. Chuck Sackett was the recipient of a surprise presentation on Wednesday, August 19, 2015, at Lincoln Christian University (LCU).

Dr. Sackett was the scheduled speaker at the first weekly chapel meeting of LCU graduate students for the fall semester. The surprise, was the presentation of a new book, Serving the Word, Essays in Honor of Dr. Chuck Sackett (Wipf & Stock), a Festschrift edited by Eddy Sanders and Frank Dicken with a forward by Tom Tanner. 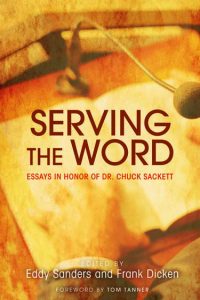 “These essays are written by current colleagues and former students who have had the privilege of studying hermeneutics, homiletics, and ministry with Dr. Sackett. Each essay covers a topic of scholarly or contemporary interest in the fields of hermeneutics or homiletics.

“The essays found in this book offer unique perspectives and approaches to interpretation and preaching. Though homiletics and hermeneutics are the fields of the study, the church remains the arena where the fruit of each discipline is observed most clearly, as Dr. Sackett instructed his students throughout his years of teaching.”

Dr. Sackett has taught at LCU for 32 years, currently serving as Professor-at-Large of Preaching in the Seminary, but he has held a variety of roles and titles during his time at the University. Additionally, Dr. Sackett is the preaching minister at Madison Park Christian Church in Quincy, IL, and serves as an adjunct professor for Beeson Divinity School (Birmingham, AL) and TCM (Heiligenkreuz, Austria). He has served in many Eastern and Central European countries, as well as in Mexico, Canada, the Philippines, Ireland, Scotland, Australia, and China.

Sackett is a graduate of Boise Bible College (BA), Lincoln Christian Seminary (MDiv) and Trinity Evangelical Divinity School (DMin). He has served as Vice-President and President of the Evangelical Homiletics Society and currently serves on the Board of Directors for Restoration House Ministries in Manchester, NH. His writings are widely published in Christian journals and publications.

Dr. Sanders received is Doctor of Ministry degree from Talbot School of Theology and is currently Professor of Biblical Studies and Ministry at Saint Louis Christian College. In addition to several articles on preaching in the Christian Standard, he contributed to Deuteronomy, The Prophets, and the Life of the Church (Wipf & Stock, 2013).

Dr. Dicken earned his PhD at the University of Edinburgh and joined LCU as Assistant Professor of New Testament in 2013. He is the author of Herod as a Composite Character in Luke-Acts (Mohr Siebeck, 2014) and is a contributor to The Encyclopedia of the Bible and Its Reception and Lexham Bible Dictionary.