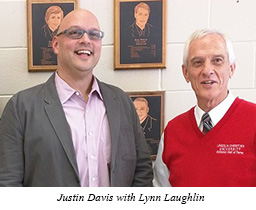 Justin Davis and Paul Davis (no relation) were inducted in a ceremony held between the Red Lions women’s and men’s basketball games against Moody Bible Institute and Principia College, respectively.

The day also featured alumni games for both the women’s and men’s teams, played in the morning before the collegiate contests.

“Justin was not only a great ballplayer, he is a great person,” Leroy Christian Church Senior Minister Jeff Mayfield, who coached Justin two of his four years at then-Lincoln Christian College, said. “It’s wonderful to see him get the recognition he deserves.”

“Justin is a great example of the kind of person we want to come play at LCU and he’s demonstrated that it wasn’t just about basketball for him, he takes his faith seriously and his ministry is what truly makes him a hall of fame-type person,” Vice President for Alumni Services Lynn Laughlin said. 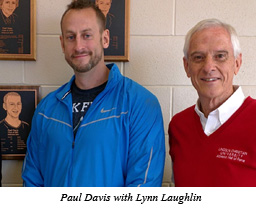 Paul Davis was unable to attend the ceremony due to ministry duties, but was honored in a private ceremony with Lynn Laughlin the week before on November 14. The plaques commemorating the induction, with a sculpted likeness, bio, and player statistics for each inductee are now hung on the Hall of Fame wall in the Laughlin Center.

Stats for the two inductees: