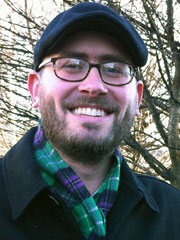 Frank Dicken is a Lincoln Christian University (LCU) alumnus (BA in Preaching, MDiv) with a certificate from St. Mary’s Seminary (Certificate in Biblical Studies). He is currently completing a PhD in New Testament at the University of Edinburgh, writing a dissertation on Luke’s presentation of the Herods in Luke and Acts.

Nick Zola is completing a PhD in New Testament from Baylor University, working on a new translation of Tatian’s Diatessaron (a second-century harmony of the four Gospels). He earned an MA in New Testament from Abilene Christian University and a BS in Electrical and Computer Engineering from Olin College of Engineering (where he served as an intern at the NASA Kennedy Space Center). Zola has taught at LCU during the fall 2012 semester, and received high marks from students in the Undergraduate Studies course on the Gospel of Mark.

Zola was actively engaged with the Robinson Church of Christ (Robinson, TX), where he served as adult Sunday school teacher, substitute preacher, children’s ministry volunteer, and small group coordinator. He lived in Germany for a time, working with two German-speaking churches, teaching lessons and helping them merge into a single church family, the Gemeinde-Christi in Hamburg. He wrote, “Why Are There Verses Missing from My Bible? The Emergence of Verse Numbers in the New Testament” (Restoration Quarterly [54 (2012: 233-45]) and translated multiple Greek passages from several early Church Fathers in D.H. William, Matthew: Interpreted by Early Christian Commentators (Eerdmans, forthcoming).

When introducing the new hires, Provost Clay Ham acknowledged, “The Faculty Search Committee, under the leadership of Dr. Bob Kurka and Dr. Fred Johnson, are to be commended for their diligent work toward the hire of two faculty members in New Testament.”