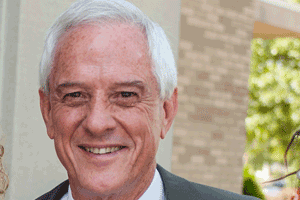 With deep gratitude and great joy, the Lincoln Christian University (LCU) Board of Trustees, faculty, and staff commended the honorary degree “Doctor of Divinity” to Lynn Ryburn Laughlin during Commencement on May 17, 2014.

“I was totally surprised,” Laughlin said of the honor, “I thought it was unbelievable what I was hearing from President Ray that day.”

Lynn Laughlin has demonstrated extraordinary commitment to the mission of LCU for nearly 50 years. That commitment has been evidenced through numerous leadership roles at Lincoln Christian including professor, coach, Vice President of Alumni Services, Special Assistant to the President and others. Most recently, he completed his duties as “acting president” while President Ray was on sabbatical.

A Man of God: Lynn has lived a life of extraordinary commitment to Jesus Christ. His integrity and character have never been found wanting. A man of humility, grace, peace-making, and faithfulness to the Word of God are all hallmarks of his heart for God. His devotion to the Lord has spilled over into the lives of thousands.

A Friend to the Students: Even though Lynn is officially responsible for alumni services, he is frequently seen among the current student body. Always present at sporting events, enjoying coffee in the Warehouse student center, traveling with students for mission and ministry events, or just checking up on a student while traversing sidewalks of the LCU campus – this is what Lynn Laughlin is all about. He loves LCU students, and they love him.

A Partner to the LCU Family: Lynn is everywhere. He spends much of his time encouraging, praying for, and helping LCU employees fulfill their mission. “Volunteer” is too weak a word to describe his availability for the mission of LCU. He always finds ways to share in the countless roles our mission calls for. Not only is he there for us, he is there for so many others. His phone is forever ringing or being held next to his ear in conversation with friends and alumni of LCU all around the country and the globe.

An Ambassador to the World of our Alumni: His photographic memory can recall the minutest details regarding our alumni. His data-base-like mind is a remarkable gift from God. He keeps a remarkable pace with travel that is equally matched by his campus engagements.

More than that, his heart follows the ministries of our alumni all around the world with prayerful support and those amazing handwritten notes that convey he always has time for God’s people.

Lincoln Christian University awards honorary doctoral degrees to outstanding men and women who, in support of LCU’s mission, are distinguished for “serving and leading in the church and the world.” LCU recognizes such individuals for their extraordinary accomplishments—characteristics that they have typically demonstrated not just for a season, but for a lifetime. In awarding an honorary doctorate, the University seeks not only to honor the recipient but also to present to constituents—students, staff, faculty, trustees, alumni, churches, and friends—a lifelong example of Christ-like servant leadership.

Lynn Laughlin is only the second recipient of the doctoral honor in the school’s history. The first was given to Tom Ewald in 2009.

Laughlin marveled that he was even considered for the honor. “I was extremely honored and extremely humbled by the whole thing,” Lynn said, “To be a part of something so rare . . . I am in very special company with Tom Ewald. He is a very dear friend and we served LCU together.”

“So many have earned their degrees through sweat and tears, and finances and scholarship. I was honored that the University would even think of recognizing me in this way and I was humbled when it happened,” Lynn continued. “My passion is students, and seeing students become leaders, the type of leaders who serve others. And, if this [degree] in any way reflects that, then I’m even more honored.”

Congratulations, Dr. Lynn Laughlin, and may God grant you many more years of outstanding service on behalf of Lincoln Christian University.