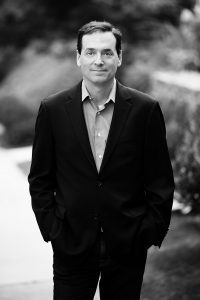 Dan Pink, bestselling author and top-rated TED speaker, spent an hour chatting with LCU business administration students via Skype last Thursday. This is the third time Dan has visited with LCU students. Students in Michael Gowin's AD101 Introduction to Business read Dan's A Whole New Mind and The Adventures of Johnny Bunko as texts. Additionally, students in AD374 Marketing II read To Sell Is Human. Professor Gowin scheduled the Skype session so the students could ask questions about what they'd read and have a chance to learn from the popular business author and speaker. The session was recorded on YouTube—you can view it here or with the player below.
[youtube https://www.youtube.com/watch?v=BAo2qsR3l1o?rel=0]
Students— Here are the textbooks you'll need for Mr. Gowin's classes for Fall 2017. Required titles are in bold. Recommended (but optional) titles are in italics.

My AD101 Introduction to Business students were preparing résumés the other day. We talked about the things that matter to employers besides the job-related skills: trustworthiness, integrity, punctuality, a demonstrated ability to work well with others, and good communication skills.

What are bad communication skills—in particular, sloppy writing—costing businesses? About $400 billion every year.

We also mentioned the importance of "show, don't tell" on your résumé. Don't tell me you're trustworthy—show me. How? You can tell me, "I'm trustworthy." Or you can show me by saying you made the nightly bank deposit for the retail store you worked in. Showing carries a lot more weight.

And that works in everything, not just résumés.

Take these things to heart and you'll have an easier time finding and keeping a job. Or, if you own and run your own business, winning and keeping clients.

You know you need to make a great impression on your job interview—but how do you do it?

Thanks to Nate Officer and Andrew Beatty, who just completed the AD292 Business Communication class I taught this fall. They raised these fine ideas in class.

If your answer is, “Nothing,” you didn’t try hard enough.

Learning isn’t something that happens; it’s something you do.

At school, you can learn from your classes and teachers—or in spite of them.

At work, you can learn from your boss, your co-workers, your customers—or in spite of them.

Pick up a book.

Take a walk outside.

Listen—really listen—to your colleague, your child, your spouse, the checkout clerk.

There’s always something you can learn.

So—what did you learn today?

Extra credit: what did you help someone else learn today?

When you see someone doing something well—playing basketball, performing an instrument, killing a presentation—you usually say that person has “talent.”

But nobody picks up a basketball and starts hitting free throws 90% of the time.

No one picks up a violin and starts playing the third movement of Brahms’ violin concerto.

And no one is talented enough to trot up to a stage and present like Steve Jobs.

People who do those things get there with a lot of practice and hard work.

The most successful people consistently put in the effort and do the work.

Coaches, parents, teachers—stop telling kids and students they’re talented when they do well. Instead, praise them for hard work.

And young people: keep trying when you fail. It's the only way to get better.

That little "news" (so-called) sidebar in Facebook told me today that SanDisk has developed a prototype 1 terabyte (TB) SD card.

That's more storage than you probably have on your computer hard drive. And it's WAY more storage than the SD card you're using in your phone, game system, or camera. The largest capacity SD card that I own is only 64 GB.

This kind of news used to surprise me. I'd shake my head and think, "Man! How do they do that?!"

I came from the era of computers that used cassette tape drives and 5.25" floppy disks. We bought our first hard drive in the mid-80's—a whopping 10 megabytes. My dad and I were astonished: "How will we ever FILL this thing?" We thought we'd have enough storage to last a lifetime.

But now 10 megabytes is a single digital photograph or a couple of MP3 files.

In the 1990s, you had to write your own code if you wanted a website. You had to learn HTML, CSS, maybe some Javascript as well. Now all you need is a few minutes in Facebook, Squarespace, or WordPress and you're set. Uber and Google are working on self-driving cars.

Technology progresses and sometimes it's interesting but it's not amazing any more. It no longer creates a sense of wonder or mystery.

You know what's amazing to me now?

The sound of crickets throughout the entire day. I hear them as I walk around the LCU campus in the afternoon.

The variety of trees, birds, and flowers that inhabit and flourish in this small patch of central Illinois that I call home.

The color of the morning sunlight as it falls across the houses and buildings in my neighborhood at this time of year. I see it when I walk my children to school in the morning.

A clever turn of a musical phrase or lyric in a poem, story, or song. The work of artists and writers like Andrew Peterson, Andrew Osenga, Mark Heard, Frederick Buechner, Walter Wangerin, Luci Shaw, Flannery O'Connor, Eugene Peterson, Issa, and Lee Gurga (I could go on)—that's the stuff that changes the way I see the world and gives me deep satisfaction.

A kind act or an encouraging word, gently spoken. In a world of cynics and naysayers, those seemingly small acts and quiet words have great power.

And the grace of God amazes me. I see it in the Gospels as Jesus touches outcasts—lepers, the blind and deaf and afflicted. People on the outside, those who aren't in the "in" cliques, who lack country club connections—these are the ones Jesus goes after.

Technology is useful (sometimes). But it's always changing and it's always promising something better. The "better," though, is usually just faster or more. And faster or more isn't always better—it's an empty promise.

It's not amazing any more.

Pay attention to the small things. The sounds and colors around us, the feel of the wind, the rhythm of conversation—those, truly, are amazing.

A couple days ago, business administration alumna Shannon Carter wrote a blog post about her experience at LCU. I asked her if she'd let us share that here; we did.

Then I asked Shannon if she'd be willing to let me interview her to follow up on what she'd written.

We chatted this afternoon and you can listen in as we talk about why she wrote her reflection, what she's doing now, and some additional advice she has for new college students.

Thanks again, Shannon, for doing good Kingdom work and letting us share that here.