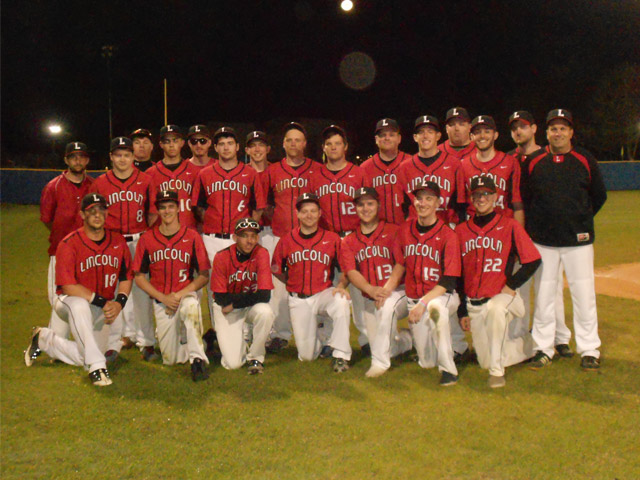 The Lincoln Christian University (LCU) baseball team hosted the 2013 Mid-West Regional Championship on Thursday, April 25.  It came down to a best-of-three series against Maranatha Baptist Bible College (MBBC) from Watertown, WI.  LCU took care of business by winning the first two games with scores of 2 – 0 and 7 – 2.

The first game was a pitching duel at its best. LCU (11-16) sent their ace, Micah Wolfe (Matoon, IL/NW Ohio Univ.), to the mound to compete against MBBC’s (2-19) ace, Derek Funkhouser (Paris, IL).  Throughout the first three innings, no runs were scored as Wolfe had a no-hitter on the line. In the top of the fourth, LCU was to able to grab the first run of the game, as Wolfe gave up the no-hitter in the bottom of the inning but continued his shutout bid. LCU grabbed another run in top of the seventh inning and Wolfe completed the shutout as he closed out the game. Wolfe held MBBC to only three hits and he struck out six. Funkhouser struck out 10, allowing only two hits.  He also gave up one earned run.

In the second game, MBBC took an early lead by scoring a run in the bottom of the first inning.  Until the fifth inning, neither team could score, but then LCU opened up the floodgates as they scored five runs in the top of the fifth. They tacked on two more runs in the seventh and closed out the game for an easy win of 7-2. Joey Burge (Lincoln, IL/John Wood CC) led the way for LCU, pitching all seven innings and allowing just five hits and two earned runs.

From the plate, Wolfe led the way in the first game for LCU as he went 2-3 and stole three bases.  He also scored a run and recorded one RBI.  Sophomore Ty Unger (Lincoln, IL/Lincoln Community High) led the way in the second game for LCU as he went 1-4 from the plate, knocking in two RBI’s with his double. For MBBC in the first game, Jacob Bauer (Milwaukee, WI) went 2-3 from the plate, hitting two singles. In the second game, Caleb Rost (Greenville, SC) led the way going 2-3, including a double and one RBI.

LCU will now move on to the NCCAA II World Series in Mason, OH on Wednesday, May 8 through Saturday, May 11, 2013.