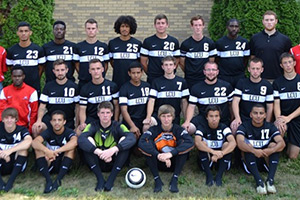 “I think that everyone on our team felt that we were better than a six win team,” LCU Assistant Coach Craig Hoskins said. “We were a young team that lost some tough games, because we could not close teams out, but I was proud of how everyone kept battling.”

Taken in total, LCU actually outscored opponents 49-44 on the season. The Red Lions defense was impressive too, as it held opponents to one goal in seven different matches.

“We are well positioned to improve for next season and will be returning a solid core who are hungry to get better and continue to push LCU soccer in the right direction,” Hoskins said.

The Red Lions men’s soccer team wrapped up its season a few weeks ago with a disappointing four game losing streak. Despite winning six of fourteen, the Red Lions stumbled down the stretch before dropping the finale to Saint Louis College of Pharmacy, 2-4.