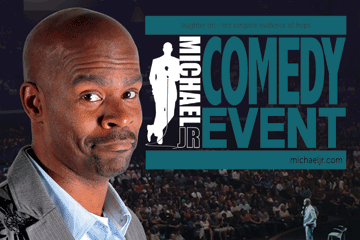 On October 5, 2013, Christian comedian Michael Jr. will be coming to LCU to perform as part of Parent Weekend. One of today’s best comics, his appearances include The Tonight Show, Comedy Central, The Late, Late Show, BET’s ComicView, Jimmy Kimmel Live, and CNN. He has also performed at the most prestigious comedy clubs across the nation, including The Improv, The Laugh Factory, The Comedy Store, The Punchline, The Comic Strip, and Zanies Comedy Club. And, if that’s not enough Michael’s versatility takes him from major universities to church events ranging from the 60,000 member Willow Creek Church in Chicago to the 17,000 member West Angeles Church in L.A. Please join us at this special event at 7 p.m. October 5, 2013, in the Earl C Hargrove Chapel on the campus of Lincoln Christian University, in Lincoln, IL.

BUY TICKETS NOW at michaeljr.com and come see Michael Jr. LIVE October 5, 2013 at 7 p.m. as part of his Stand Up & Give Comedy Tour.

For a quick glimpse of Michael’s act, click here.