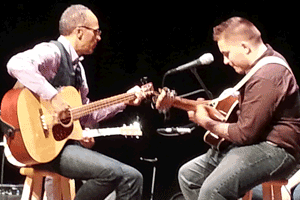 On Friday, May 9, 2014, NBC Weekend TODAY co-anchor Lester Holt paid a visit to Lincoln Christian University (LCU) to play some music with Worship Ministry major Casey Lore (Terre Haute, IN). Lore “won” the opportunity to jam with Lester Holt following his submission in NBC’s Weekend’s Biggest Fans contest series. The segment with Holt and Lore will be televised Sunday, May 18, during Weekend Today broadcast.

NBC put the word out at the end of March…they were looking for Weekend TODAY’s biggest fans. To sweeten the deal, the four co-anchors offered to spend quality time doing what they enjoy most when they are not on the job. Right there, on today.com Holt was quoted as saying, “If you love music like I do, let’s play together.” Lester plays bass guitar.

That was all it took to inspire Lore to submit his entry right before Easter. In his biggest fan essay, Lore pointed out all the reasons Holt should pick him. Lore is a veteran of the Iraq war, continues to serve as a member of the Illinois National Guard, he is currently studying music at a Bible college, leads worship at a central Illinois church, and loves to play the guitar (among other instruments). He summed it by saying “since Lester is a church guy and plays an awesome jazz bass, I think it’d be really cool if we got together for a jam session.”

The contest ended on April 30 and Lore received a phone call from the producers that Friday. He had won! Lester Holt would be coming to “jam” with him on May 9 and one week later, Lore and his wife Caitlin would be headed for New York.

Arrangements were made with LCU’s Worship Ministry program director Jeff Colleen and the auditorium technical director Tom Sowers to use the Earl C Hargrove Chapel Auditorium stage for the jam session which would be recorded for the Weekend TODAY show segment.

It was a full day of filming with NBC producer Kim Cantrell and her film and audio team who drove downstate from Chicago for the filming. Lester Holt was scheduled to spend three or four hours with Lore, but flight delays and the need to be back in New York for the morning broadcast condensed that quality time to about 1 hour.

To heighten the excitement of the once-in-a-lifetime experience, Lore’s family came from Terre Haute, IN, and the Marshall, IL, area to join the LCU community in welcoming Holt and enjoying the mini concert late on Friday afternoon. Joining Holt and Lore on stage were classmates and friends Martin Gutierrez (Las Vegas, NV),Mario Gurule (Las Vegas, NV), and Josh Claeys (New Windsor, IL).

Holt arrived in Lincoln about 3:45 p.m. looking young and hip with his guitar in hand. The impromptu band played four gospel and jazz songs together to an audience of almost 100. The visit ended with photos of Lester Holt with the band, with Lore and his wife, and with family members.

Speaking with Lore later, he said, “Man, he can really play that bass! I was watching him and he didn’t miss a note. It was so awesome.”

The Weekend Today segment aired on Sunday, May 18, 2014. View the video here.