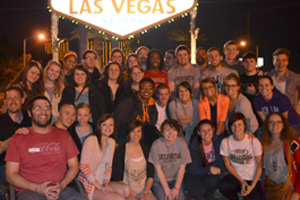 For my 2013 Restoration week, I went to Las Vegas for the second time. Although the trip was set up the same as it was in 2012, it was a completely new experience! I went with an amazing group of students that were led by Brian and Chantell Mills, and we never had a dull moment. We were able to help out all over the city. We helped at churches, a women’s resource center, and a homeless shelter. We were also blessed to hear an amazing testimony from a guy who at one point had everything and then lost it because of a drug addiction. He became homeless and later found Christ. He has now started a homeless ministry that continues to evangelize to the homeless people of the city. He has truly influenced my life with his testimony!

This trip helps you appreciate the things that you sometimes take for granted in your own life. If it takes serving over 400 trays of food to homeless people, hearing a powerful testimony, seeing people that are in need and you are able to serve them or just talk to them and get to hear their story, then this trip is it!