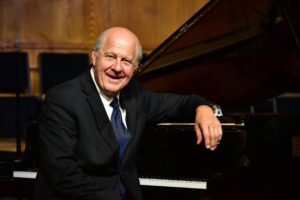 The concert is free, no registration necessary. A freewill offering will be taken.  Masks must be worn inside.

When Sam Rotman made his debut at the age of 16 with the San Antonio Symphony Orchestra before an audience of 6,000 people, the Baldwin Keynote Magazine wrote, “Sam Rotman is a pianist with abundant potential.”

Mr. Rotman received his Bachelor and Master of Music degrees from the Juilliard School in New York City. While a student, he was the recipient of nine awards in the form of grants, scholarships, and prizes. Today Mr. Rotman is a member of The Augustus D. Juilliard Society at the Juilliard School.  Subsequently, he has been among the winners in five piano competitions, both in the United States and Europe.

The most prestigious award was that of Laureate Winner in the 4th International Beethoven Competition in Vienna, Austria. Mr. Rotman participated in the 6th International Tchaikovsky Piano Competition in Moscow, Russia. In May 2016, he was awarded an Honorary Doctor of Fine Arts Degree from The Master’s University where Dr. John MacArthur is President.  Mr. Rotman is the only recipient of such an Honorary Doctorate in the school’s history. He was also nominated for the Pennsylvania Governor’s Award for Excellence in the Arts. Mr. Rotman  has given over 3100 performances in the United States, Canada, Mexico, the Caribbean, South and Central America, Africa, South Africa, Europe and Asia, totaling 61 countries.