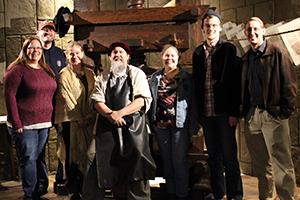 Museum of the Bible Scholars Initiative (MOTBSI) is a unique opportunity for students to interact with and analyze ancient Judeo-Christian manuscripts, primarily biblical manuscripts. Students involved in the project work with a scholar-mentor to identify the text, write up a transcription, note textual variants, and date the handwriting. Often these texts are not yet published. 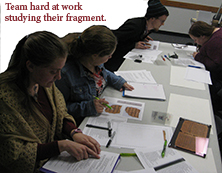 At LCU, Dr. Nicholas Zola, Assistant Professor of New Testament and Early Christianity, along with Dr. Frank Dicken, Assistant Professor of New Testament, is leading a group of LCU students in translating, transcribing, and dating their own manuscript, which is an unpublished fragment of Paul’s letter to the Romans. They led seniors Brandon Berry, Thea Stephens, and Jessie Sweeney and Seminary student Jasmine Howe as the MOTBSI team at LCU. In December 2014, the team took a trip to Springfield, Missouri, for a chance to see their fragment in person and to receive a personalized tour of Passages, a traveling exhibit dedicated to the story of the Bible, led by MOTB’s Dr. Josephine Dru, Curator of Papyri. Dr. Dru showed the team the exhibits of the museum directly related to biblical manuscripts, including a full-length replica of the first Isaiah scroll discovered among the Dead Sea caves, and an in-depth look at how ancient papyrus was produced. The tour allowed the team to study many biblical manuscript fragments recovered from areas all over the ancient world. After touring the museum, the students participated in a manuscript exercise Dr. Dru prepared to demonstrate the skills the students would need to analyze their own fragment. Finally, the students enjoyed an opportunity to work directly with the fragment of Romans that their team is studying. They used this time to take measurements of the letters, to examine the missing portions of text for additional clues, and to begin an initial paleographical analysis.

At the end of the project, the team will be producing an edition of their fragment for publication, which will include a description of the piece, a transcription of the text, and a dating of the handwriting, among other items. The project is a rare opportunity for LCU students not only to hold a piece of history in their hands, but also to make a solid contribution to New Testament scholarship and textual studies.