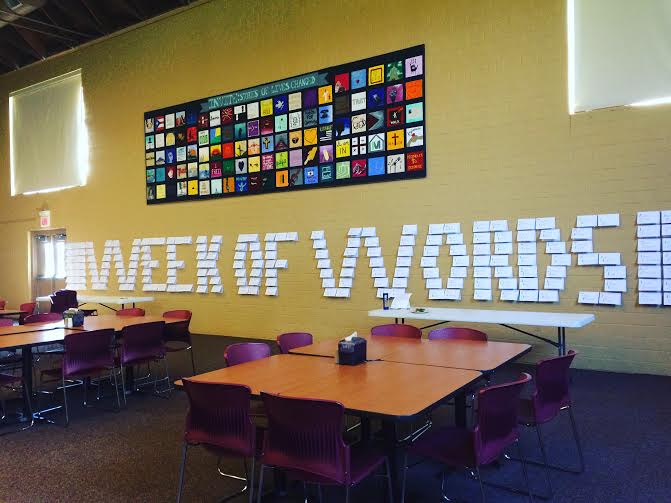 Led by LCU junior, Jose Cortez, the undergraduate student body’s Generosity Committee organized “Week of Words” during the week of April 11 through 15, 2016. Week of Words has become an annual event for the Lincoln campus to dedicate a week to encouragement and prayer. Each day has a unique focus with a planned station or activity for students to participate in.

The Generosity Committee works to create unique activities for Week of Words every year. This year’sWeek of Words did not disappoint. Day one focused on the self: A station was set up in the Warehouse Student Center, where students could write letters to themselves, reflecting on the day and how they were feeling. The second day was centered on peers: In the cafeteria, there were cards with the names of all the undergraduate students on them and the students were able to write encouraging notes to their peers. Both the letters students wrote to themselves and the notes written by others will be returned to students before the end of the year. The third day focused on mentors: Students cooked meals and served the faculty and staff for lunch. The community was also encouraged on the fourth day through thank you notes written by students. Finally, in the prayer room there was a station set up to pray for the “forgotten” of the world, those stricken with poverty, broken in slavery, and afraid for their safety in their own homes.

The impact of Week of Words lasts much longer than one week. “I have kept each encouraging note from every Week of Words in which I have participated,” said senior Taylor Heston, an Intercultural Studies major from Bethalto, IL. “They help when I am feeling stressed and overwhelmed.”