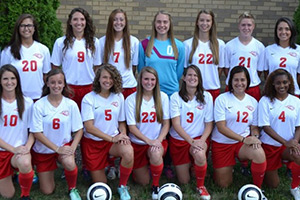 The Lincoln Christian University (LCU) Red Lions women’s soccer team ended its season on Saturday, October 31 with an on-the-road loss to Saint Louis College of Pharmacy. The women finished two games shy of .500 this fall, but it was a season full of accomplishment nonetheless.

“I’m grateful that the program is getting back to form after a disappointing season last year,” LCU Women’s Soccer Head Coach Todd Spellman said. “I’m very proud of the girls for all the effort they put in. We did very well this season, even when fighting injuries to several key players.”

LCU finished the season ranked first in the National Association of Intercollegiate Athletics (NAIA) in total goals scored and goals per game. LCU competes as a member of the NAIA and the National Christian College Athletic Association (NCCAA) Division I.