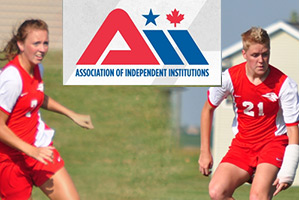 The AII is a conference comprised of 28 NAIA teams from across the country that are not affiliated with a regional conference.

“This a great honor for the two of them, and a great honor for the team to have two payers on the all-conference list after only two seasons in the NAIA,” LCU Women’s Soccer Head Coach Todd Spellman said. “They both come from great high school programs and have a good history with club play. It’s no surprise that they would contribute the way they have, and get the recognition they deserve.”

“They are great examples of our team values of diligence, perseverance, and love,” Spellman said. “When team awards are announced later this month, I won’t be surprised if their teammates vote for them to receive other honors as well. The best part is, they are both first year players with a lot of time to continue to grow and contribute. I am very excited for the future of the LCU women’s soccer program.”

The Red Lions women’s soccer team finished the season with six wins and eight losses on the year, tying the LCU record for most wins in this program’s history.