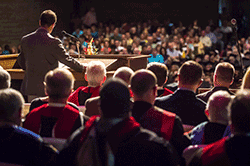 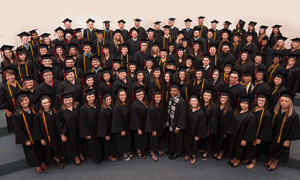 More than 150 graduates and their families filled the Hargrove Auditorium in a final celebration of LCU’s milestone 70–year anniversary. A total of 250 graduates earned degrees during the 2014-15 academic year in more than 50 career and ministry fields that span academic levels from certificates, associates and bachelor’s degrees to master’s and doctoral degrees.

As LCU concluded its 70th Anniversary year, it was timely for Eddie Lowen, Lead Minister of Westside Christian Church in Springfield, IL, to deliver the commencement addresses as a representative of this treasured partner church. It was Mr. Earnest Laughlin, LCU Board member from 1946-1963 and Senior Minister of West Side Christian Church, who delivered the very first commencement address in 1946.

In his address, entitled “Mostly Wise,” Mr. Lowen reminded the audience that graduation is not a destination – it in an intersection, a check point. He warned graduates that as they continue their journeys they will learn that “every voice wants you to listen to it. Every voice believes it is right. With a billion voices in our ears, who do we listen to?” Lowen answered that question simply: “If you can only listen to one voice, listen to Jesus. Because,” he concluded, “on that day, all other voices will be lost as you look up and see Jesus.”

LCU holds just one Commencement each year, and allows students who graduated the previous August and December to participate if they wish. While some students choose to graduate in absentia, others come from far away. This year, graduates traveled from Nevada, Missouri, Indiana, Michigan, Hawaii, Kansas, Florida, Ohio, Kentucky, Wyoming, Hungary, and Colombia.

Photos from the day may be viewed and ordered online at ssarver.smugmug.com. To view one or both of the Commencement Services in their entirety, click on the links below.