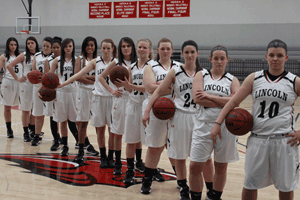 The LCU Red Lions fell behind early, but it only took seven minutes to move into a permanent lead over the Kyper Cougars. LCU went into the locker room with an 8 point lead, 27-19.  That was simply a prelude, as the Red Lions came out in the second half to add 38 to their already comfortable lead. Coach Amanda Bowman’s Red Lions posted their twelfth win this season and their eighth consecutive win, with a final score of 65-42.