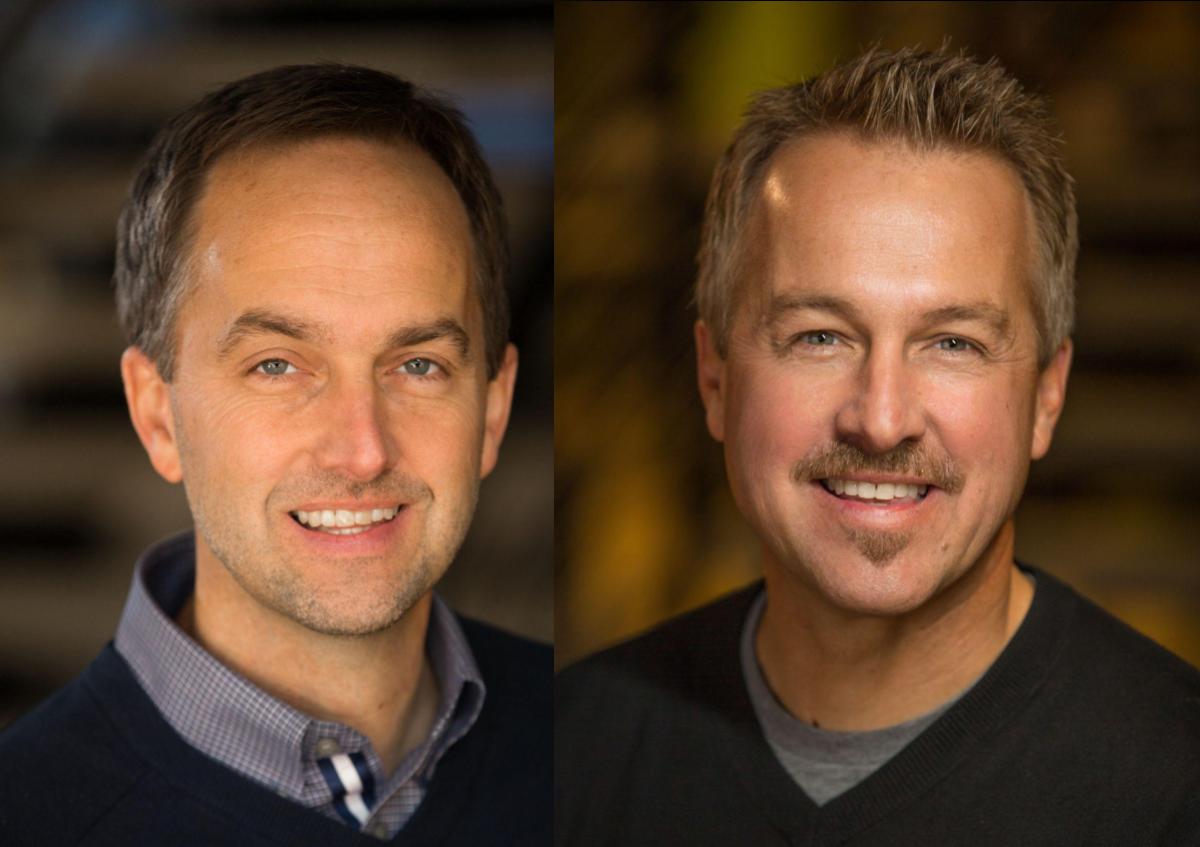 The Bible reminds us that our goal as believers is to become disciples of Christ and to help others to become disciples as well. Lincoln Bible Institute, then Lincoln Christian College and Seminary, and now Lincoln Christian University exists to prepare Lincoln Leaders to serve and lead in the church and the world. There are thousands of LCU alumni who have made it their mission to fulfill the Great Commission. And of those thousands, there are those who stand out, who serve Christ with distinction, and go the extra mile to plant and water the seeds of the Kingdom. These are the individuals chosen to receive Lincoln Christian University’s highest Alumni honor, the Restoration Award.

2021 Lincoln Christian University Restoration Award recipients Dave and Jon Ferguson have a heart for reproduction. A vision began at Naperville Central High School in 1989 with the goal of helping people find their way back to God. You can hear COMMUNITY’S heart for reproduction in their mission statement: “We accomplish this goal by reaching people far from God, restoring God’s dream for the world, and reproducing this mission in others.” And nowhere is that mission more exemplified than in the hearts of Dave and Jon Ferguson.

David and Jonathan Ferguson are sons of Lincoln Leaders Earl and Pat Ferguson. They lived in Farber MO until 1967 when the family moved to Park Forest, IL. They walked almost one mile each way to school because let’s face it, it was the 1960’s. Both brothers excelled in their studies. Jon could even recite the books of the Bible at age 5. When the family moved to Park Forest South, they each held the title of president of their sixth grade class. Both also enjoyed time on the baseball field and basketball court. Neither boy was afraid of a little hard work, a quality that would be vital in their ministry journey later on. They had a lawn mowing service, which included mowing the church yard. Dave also worked at the local Chinese restaurant. They did not allow their other activities to get in the way of their student ministry experience, both attending Lake Region Christian Assembly for many years while actively participating in the youth group at Deer Creek Christian Church. Living in Crete IL for their junior high and senior high years, each brother contributed to their school community in their own unique ways. Jon participated in the play “The Music Man” as one of the men’s quartet. He lettered in basketball and golf while also working at the local Burger King. Dave continued playing basketball and baseball while in high school and added a letter in tennis as well, and during summers he drove an ice cream truck. Upon graduation from high school, both Dave and Jon continued their education at Central Christian College of the Bible in Moberly MO before each transferred to what was then called Lincoln Christian College, now Lincoln Christian University. Dave received his Bachelor of Arts degree from LCU in the field of Christian Ministries in 1986 and Jon received his Bachelor of Arts degree from LCU in the field of Christian Education in 1987. While at LCU, both brothers continued their preparation for what God was calling them to in Naperville, with Jon serving as youth minister at Clarendon Hills Christian Church and Dave becoming youth minister at his home church in Deer Creek. Dave married Sue and they have three children– Amy, Joshua and Caleb. Jon resides in the Lincoln Park Community of Chicago with his wife, Lisa, and their two children, Graham and Chloe.

On March 5, 1989, COMMUNITY was founded by Dave and Jon and 5 of their friends holding its first services at Naperville Central HS. From the beginning, it was their vision to “help people find their way back to God.”

Over the next two years, COMMUNITY became self-supporting and moved into a weekday leased facility. In 1997, they purchased land in Naperville for their first permanent facility. As only God’s grace and provision could accomplish, their first campaign nearly doubled the initial goal of $1.2 million dollars.

They launched their 2nd campus in Romeoville March 22, 1998, a unique partnership with a developer and a local not-for-profit. This new multi-site approach allowed them to reach more people than ever before and COMMUNITY was one of the very first churches in the U.S. to implement this model for reproducing.

In the fall of 1999, COMMUNITY began construction on a permanent facility in Naperville, which eventually became known as the Yellow Box.

Two years later, the Naperville campus moved into a new facility while the Romeoville campus prepared to expand. Carillon, a 55+ gated retirement community, became the 3rd site. In the Spring of 2001, God did a new thing in the life of Community, quite literally, with the founding of NewThing, a church-planting network designed to be a catalyst for a movement of reproducing churches.

In 2002, COMMUNITY launched Montgomery Campus as the 4th location. A new capital campaign began with a goal of $5.2 million and received pledges in excess of $6.4 million. This allowed for growth and expansion in Naperville, Romeoville & Montgomery.

In 2003, the church initiated construction of a Children & Arts Center at the Romeoville Campus which gave us a permanent presence there. We celebrated over 200 people who made public commitments through baptism! In that same time frame, Community 4:12 was launched as an outreach ministry whose vision is uniting people to restore communities.

In 2004, COMMUNITY launched 2 locations in Shorewood, one at a private school and the other in downtown Naperville, which now meets on a college campus.

Continuing their heart for reproducing churches, the Pilsen Campus launched in the spring of 2006 on the southwest side of Chicago. This unique location held both English and Spanish-speaking celebration services during its lifetime. The Yorkville Campus also launched in the fall in a historic courthouse and has since purchased permanent space in a retail center.

In 2008, COMMUNITY sent 150 people, their largest launch team to date, to start the Plainfield Campus.

2010 saw the launch of the East Aurora Campus in a predominantly Hispanic area where Community 4:12 has served since its inception. This location holds bi-lingual services!

In 2011, COMMUNITY launched a new campus in Lemont and 2 more in Chicago, in the Lincoln Square and Edgewater neighborhoods.

In 2013 the church started a new campus in the Lincoln Park/Old Town neighborhood of Chicago bringing our total number of campuses to 13! Several campuses began location-specific generosity initiatives called “ALL IN” to allow for future growth.

Meanwhile the Naperville Yellow Box campus completed the construction of a 1,300 seat auditorium in 2014 with a large connecting area and a dedicated space for training and equipping future church leaders through NewThing.

Community Christian Church celebrated our 20 year anniversary in 2019 with a big outdoor service with about 7000 people in attendance and over 100 baptisms.

And here we are in 2021! Along the way COMMUNITY has started new locations, merged some locations and closed other locations. There are now 9 physical locations, 3 Community Freedom locations that minister to the incarcerated, the online work of CommunityOnline.TV as well as several 3C micro church Communities in English and Spanish. But at their core it is, as COMMUNITY says, one church with 4 Expressions. As we celebrate Jon and Dave Ferguson today, we are grateful for those individuals who stepped out in faith back in 1989 to begin this incredible journey.

Their heart for reproduction continues through NewThing, an international church planting movement with a mission to be a catalyst for movements of multiplying churches. There are currently 24 movements, 177 networks and 1558 churches that are a part of NewThing with 351 leadership residents currently in training to plant new churches. Our global vision includes the pursuit of 10,000 multiplying churches and a presence in all 196 countries of the world.

And we would be remiss without talking about Exponential. Dave Ferguson is the Exponential Board President and Jon Ferguson is the Exponential Board Secretary. Exponential is the largest church planting conference in the U.S. with a mission to mobilize multipliers. Exponential sells out annually with it’s featured conference in Orlando and regionals in New York, DC, Chicago, Boise, Houston, LA and Bay Area with more than 10,000 attenders in person and more than 30,000 attenders online. Exponential is not only a premier thought leader in the area of disciple multiplying, hero making leadership and church planting; it is also a leader in creating cutting edge resources, tools and cohorts.

Dave is Lead Pastor and is an award-winning author of leadership books which have all sold multiple thousands of copies, including The Big Idea, Exponential, On The Verge, Discover Your Mission Now, Keeping Score, Finding Your Way Back to God, Starting Over and most recently Hero Maker. Dave has written many articles and spoken on every continent at various leadership and church planting conferences.

Jon Ferguson serves as Lead Teaching Pastor and provides leadership in New Ventures, which includes leading a multi-ethnic, multi-denominational church-planting movement in Chicagoland. He is an exceptional author, having co-authored Finding Your Way Back to God, which was recognized as a Resource of the Year by Outreach Magazine for 2016. The follow-up book, Starting Over was released September 20, 2016. He has also co-authored The Big Idea and Exponential. Jon is a frequent speaker at national and regional conferences.

You have heard the word “reproduction” several times in this video, which is what brings Lincoln Christian University here today. It is amazing to watch Community in her commitment to reproducing Christ-centered disciples and churches in a variety of ways. And we are grateful that two Lincoln Leaders are at the leadership helm of it all. It is our honor and privilege to present Dave and Jon Ferguson with the Lincoln Christian University 2021 Restoration award, the first recipients in our 77-year history in the category of Kingdom Reproduction.