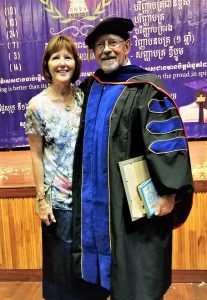 Present at the ceremony was President of the University, Moses Samo Seth, and the Cambodian Secretary of State. Moses wanted to acknowledge Joe’s many years of commitment to the Cambodian people through Compassion Ministry.

Since 1978, Joe has made many trips to Cambodia where God gave Joe the vision for Compassion Ministry.  The ministry included rice distributions, teaching in churches, and working through Agape International Ministries and Moses Samo Seth with children rescued from sex trafficking.  Using earth block made from the soil on their property, three buildings were constructed for their ministry to the rescued children. 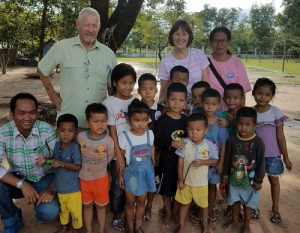 A native of Sullivan, Indiana, Joe served in the U.S. Marine Corp.  He married Lynn Simmons, and they began their walk of faith.  They moved from Warsaw, Indiana, where Joe worked for R. R. Donnelly, to Chicago to work for Family Circle Magazine.  Having resolved that he wanted to serve God, they moved to Lincoln to prepare for the ministry and graduated in 1977.  He served Christian churches in Illinois, Texas, and Indiana.  Joe spent 45 days as an EMT in a refugee camp with survivors of the Khmer Rouge genocide that killed over two million Cambodians.  This experience gave Joe a new direction in ministry.

Joe went to work for Feed the Hungry in South Bend, Indiana, working in disaster relief around the world.  Joe and Lynn then moved to Warsaw, Indiana, and founded World Compassion Network after 9/11.  This organization serves victims of natural and man-made disasters around the world.  Their walk of faith has taken them into 140 countries.